Laurie Vincent is one of my favourite current contemporary artists; as well as being a killer guitarist in punk-grime duo Slaves, Laurie is also building up a reputation for himself as one of the UK’s more exciting, intriguing painters. His art often stirs controversy and raises eyebrows, forcing people to question the nature of the art and engage in the meaning behind it; it’s bright and bold and expressive, and I’ve been a fan of it for a while now. Laurie’s had his art on display at loads of brilliant little venues, including the A-side B-side gallery and Flaubert gallery, as well as hosting a solo exhibition at the Amersham Arms earlier on this year which I was lucky enough to get down to. The dynamism and unique controversy of his art shook me- it’s powerful and full of compelling expression, with an evocative vibrant aura. I caught up with Laurie recently to speak about what influences his art, taking a break from his tattooing, and his favourite modern day artists. You can read my Q&A with Laurie below. 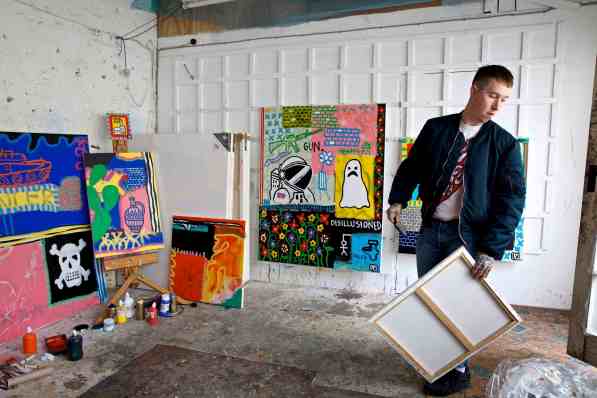 At what age did you start painting, and how has your art style developed since then?
I’ve painted for as long as I can remember. There were always pads of paper and loads of different art supplies in my house growing up. I remember doing watercolours as a child. As I went through school and college I got to experiment with loads of different medias but my style was really born out of needing to do artwork for the band. I taught myself how to use photoshop to design posters, CD sleeves and merchandise. I also started painting on canvas as a way to bring my designs to life and have real impact as pieces of art rather than just illustrations.
Which artists have influenced your art work, if any?
Obvious ones would be Jean Michel-Basquiat, Keith Haring, Raymond Pettibon and Barry McGee. More recently I’ve been very inspired by Danny Fox, Hetty Douglas, Jordy Kerwick, Kinglsey Ifill, Abe Odedina, Ben Edge, Wes Lang and A R Penck.
What’s it like balancing the band with your art and tattooing?
I have taken a step back from tattooing, it requires full time commitment and I didn’t feel I could do it justice with my current other jobs. My art is much easier to fit in around the band. I keep sketchbooks on the road and when I am off tour I have a studio where I spend as much time as I can creating work.
Tell me how you got into the tattoo industry
I had a friend who went out with someone who had just got a tattoo apprenticeship. I used to let him practice on me, then we became really close. He got me a job working on Saturdays and the rest followed after that. 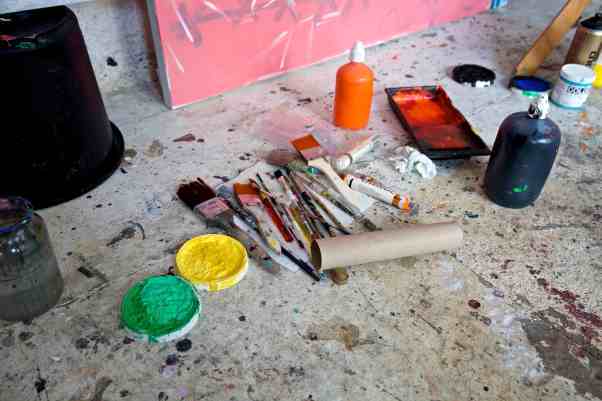 What sort of things inspire your paintings?
Travel, I find walking around the streets of the cities I visit very inspiring. I use a lot of found imagery and if you aren’t out looking for it, it takes a lot longer to come to you. So I try to take lots of photos of anything that seems interesting or eye catching.
Other painters really inspire me too and I like seeing people producing work on Instagram and going to shows whenever I can.
You’ve recently moved your art studio to a new space- is the city you’re based in important to how you work as an artist?
Environment directly effects my work. I didn’t realise this until I moved. I am very happy in Brighton and now I’m settled it’s helping my work develop in new ways.
Are there any links between your art and music?
I think everything I create is directly interwoven. My art has been used throughout the band’s career in lots of different ways. I wouldn’t see half the things I see without the band so my influence comes directly from the experiences I have with my band. They must be linked because of that.

You’ve had work displayed at a number of exhibitions in some great venues, including the A-Side B-Side Gallery, The Amersham Arms, and The Flaubert Gallery. Where would you like to have your art displayed one day?
All over the world, in people’s houses who care about my work, museums, wherever people can see them and they bring people joy, or any feelings.
Obviously you’ve collaborated with the wonderfully talented Daisy Parris; which upcoming artists would you like to work with?
Hetty Douglas is an artist I really admire, her work is really refreshing. I own a piece of it and I spend so much time just staring at it throughout the day. Elizabeth Ilsley is doing her thing so well and is paving the way for young artists. Kinglsey Ifill is another artist I also really like. A group show or something with those guys would be great.
You’ve created loads of sick artwork for Slaves- tell me about that
I used to just create for Slaves in any style that felt necessary for the moment. I was a bit of a chameleon depending on what we needed. I’ve done graphic design, pen drawings, photo shot painting, photography. A lot of it doesn’t feel like my style but I did it to help create an image and style for the music. It all lead to my style I’ve now found too.
Which piece of art are you most proud of?
That changes on a daily basis, usually the most recent one I’ve done.

Where did the infamous balaclava motif come from?
A picture in a issue of vice. It was a girl wearing a balaclava, it really caught my eye. The femininity of the eyes and the bright colour of the balaclava juxtaposing the sinister feel a person wearing a balaclava gives you. I like things that can be viewed in two ways.
How did the Young Lovers Club brand develop, and what’s it like having your pieces on sale in stores like Selfridges?
I just wanted to make some t shirts to wear. Then I thought it would be cool to make my own tracksuit, it was all an exercise in seeing what I could actually get away with doing. Selfridges is one of the most surreal things that has happened to me. I can’t quite get my head around how that happened.
Could you just tell me a little bit about the following pieces of art (all my personal favourites!):
1) ‘Burn Babylon’
It’s a mermaid with a balaclava holding a pink machine gun.
2) ‘Say Something Please’
The first painting I felt was successful and one my girlfriend will never let me sell, it hangs in our living room above our fire place.
3) The seagull design
A doodle that was inspired during a trip to Cornwall to see Danny Fox’s studio in St Ives.
4) ‘Cheer Up London’ artwork
Chalk portraits I produced of both of us. I didn’t intend it to be for the cover, but we were pushed to hand in some artwork and Isaac liked them so we went with it. One of my favourite single covers actually.
You’re very vocal about your political views; is this something you’d like to replicate/ have replicated in your artwork?
I want people to feel whatever they want when they look at my art. I don’t intend on telling people meanings or what I think my paintings represent. People should have their own experiences with them. I’m gonna leave it like that.

For more on Laurie, you can find his Instagram at @laurieslavesvincent, or check out his wesbite and Young Lovers Club site