On the surface, St Albans is a pretty normal, clinical suburban city yet behind that, there is a vivid music scene for young indie rock bands. The Horn is one of the country’s most renowned small venues for rock music, and whilst hosting loads of big names over the last year, including VANT, The Magic Gang, The Hunna and The Bohicas, it’s also known as a hub for new upcoming bands from the local Hertfordshire area. Tuesday night (6th September) was an intense, fun, music filled evening at the venue, with performances from local rock bands Moon Blue, The Visitors, Echo Infirmary and a special opening set from RAH!

The night started with an opening set from RAH!, made up of Angus Hughes and Jake Redgwell from Echo Infirmary on lead guitar/ vocals and drums respectively, with Lucy Crockett from Moon Blue on bass guitar. It was a fun casual set, clearly the three were just having loads of fun on stage, and their performance was relaxed yet retained a really catchy, infectious energy. Lucy was so effortlessly cool on stage as well in her Stone Roses shirt, flinging out a series of mega sounding bass lines. Angus is crazily talented as well, with really great skills both on the guitar and as a vocalist- this accompanied by Jake’s brilliant drumming really helped build up the anticipation and excitement in the venue for the main three bands.

And then the first main act was on; The Visitors. Clearly heavily inspired by bands like Red Hot Chili Peppers and Arctic Monkeys, they rallied the crowd with their vibrant excitable energy on stage. Alex is a typical fun indie frontman, with a really raucous rowdy stage presence that the crowd clearly loved. Even the repeated dabbing was popular and their set had a really great feel good fun aura. Their setlist consisted of a few covers, with the band performing impressive versions of ‘Moonage Daydream’ by David Bowie and ‘Don’t Sit Down Cause I’ve Moved Your Chair’ and ‘I Bet You Look Good On The Dancefloor,’ both by Sheffield rock icons Arctic Monkeys. Their original tracks were just as impressive too, and really great to finally hear live after getting into the band a good few months ago. My personal favourites are ‘Partying All Night’ and ‘Change’; the live sound of these tracks was so intense, with a really great crowd to accompany the immense sound the four piece created. Another amazing element of the band is Matthew on guitar who comes out with amazing riffs, which clearly have hours of practice behind them. This talent was particularly striking with his note perfect guitar on their cover of ‘Moonage Daydream’ which The Last Shadow Puppets have recently covered on the majority of their UK dates. For more on The Visitors, you can check out their Soundcloud account, my top tracks being their cover of ‘Brianstorm,’ or original track ‘Out From Here.’

The next band to perform were four piece rockers Moon Blue. Made up of Hattie Randall, Lucy Crockett, Tara Simmonds and Lily Newby-Ricci, the indie rock group performed a brilliant set, including a fun cover of Dizzee Rascal’s ‘Dance Wiv Me.’ Their seven track long setlist also comprised of some of the band’s original pieces like ‘King of Hearts’ and ‘Up and Out’. For me their set was a really lively, energetic one with an intense buzzing onstage spirit. They seemed so relaxed and casual and comfortable on that stage too, despite the fact they were playing to a sold out venue. Moon Blue’s music is really fun to listen to as well, and it’s so infectious and lively when played live. Lucy and Lily are really strong on guitar as well, belting out really insane guitar riffs. Having never seen the band live before, it was so refreshing to see a sick new live band for the first time; definitely helping with St Albans’ growingly exciting music scene, Moon Blue are dazzling and exciting, definitely one to watch. 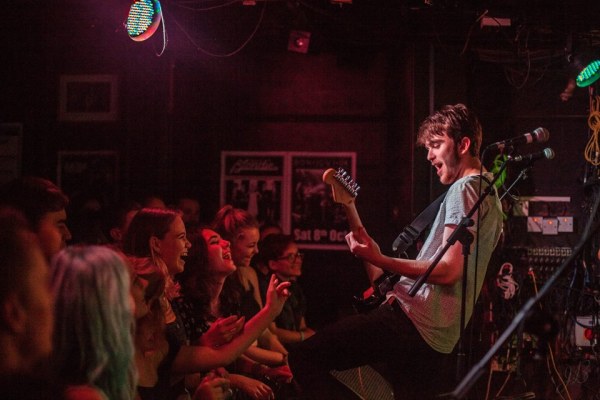 And then the final act to perform was the main band of the evening: Echo Infirmary. Having supported acts like VANT, Man Made and Missing Andy at The Horn before, they’ve also appeared at The Horn as the headline act regularly. Their set last week really was amazing, with such a great crazy intense on-stage energy. Their stage presence is vivid and loud and they got the crowd going so easily- their talent and relationship as a band is so blatantly clear as well and that really entertained the crowd. This gig was sadly the band’s last before the four members go off to uni, but they certainly ended their streak with a bang; it was such a great piece of messy loud blaring indie rock music, and their intensity and pure rock ‘n’ roll bite on stage really reminded me of an early Arctic Monkeys in that they had a really cool ‘don’t care’ attitude, matched with blaring tracks and crazy guitar riffs. A really unique element about the band is Max, Angus and Jamie all take turns on lead vocals, paired with each of them on guitar (Angus and Max on lead, with Jamie on bass). This intriguing set up is combined with Jake’s insanely skilled drumming which bought their set together so well. Their setlist was great too, including a cover of ‘Stacy’s Mom’ by American rockers Fountains of Wayne. It also included a load of the band’s original tracks like ‘Bust Your Windows,’ ‘Make You Mine,’ ‘MIA’ and ‘Ultra Violet.’ 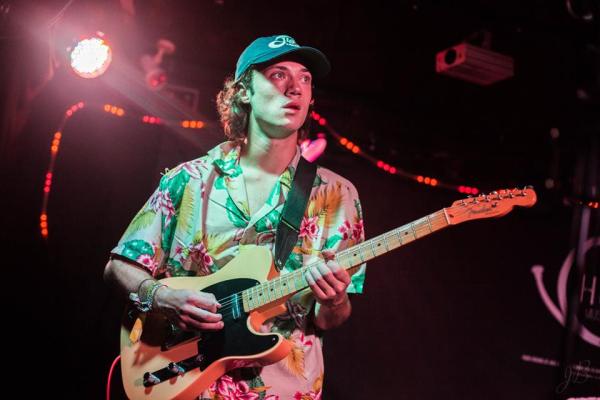 The night overall was pure class, full of really great local indie talent, with blaring tunes and riffs, just a great night for rock music. The Horn delivered 100% as a local music venue too, with a really small sweaty dark room and incredible sound system that amplified the guitar and vocals ridiculously well. The Visitors, Moon Blue and Echo Infirmary were wonderful, and really set the bar high for local indie rock music; and it will be hard for a local gig to beat the lively intense atmosphere the three bands created last week.

For more on the three bands, you can follow them on Facebook and Soundcloud via the links below

One thought on “The Visitors, Moon Blue, and Echo Infirmary: the best of St Albans’ indie rock scene in one evening”