Sheffield’s finest indie-rock band, Arctic Monkeys have never released a bad track, let’s be honest; all their albums are full of intense guitar riffs, beautiful lyrics, and insane drumming. The band completely changed the meaning of indie rock, and are the best band to come out of the UK in a decade. This list decides on their top tracks, so here are your top Arctic Monkeys tracks you need to know.

This classically intense rock track from the band’s debut starts off the album with a heavy explosion of edgy guitar loops and immense vocals. Also featured on the ‘Who the Fuck are Arctic Monkeys?’ EP, the heavy head banger full of catchy guitar riffs has Alex talk about the disappointments in evening entertainment and the rhetorical failure and dissatisfaction caused by anticipation. Alex’s witty sharp lyrics, paired with the heavy guitar from Jamie (lead guitar) and Andy (bass) and Matt’s complex drum riff make for an intense track.

One of the band’s most authentic catchy guitar riffs comes from Favourite Worst Nightmare’s Teddy Picker, with its famous bass line now one of the most well know rock riffs. The Duran Duran influence comes through lyrically, with Alex singing the line ‘I don’t want your prayer. Save it for the morning after,’ taken from the 1982 track ‘Save a Prayer.’ But the track isn’t a new wave, synth-pop one; it’s a heavy indie rock banger, where it ends with Alex quizzically asking ‘who’d want to be men of the people, when there’s people like you?’

2013’s AM saw a wave of new more experimental tracks, with a variety of new sounds and genres explored, but their electric single ‘R U Mine?’ bought the album back to the band’s basic roots of intense loud riffs and hardcode indie rock at its finest. The gritty track depicts lust and longing, and a crazy uncertainty about love. The black and white video starring Turner’s then girlfriend Arielle Vandenberg has a retro Beatles-y vibe and features constant shots of Alex’s Sheffield tattoo and Matt and Alex air drumming (as if air guitar isn’t cool enough.)

This Humbug track is one of the band’s best; one of the most complex drum patterns in their entire discography, the track showcases Matt Helders as one of the best drummers of all time. Alex sings the lyrics so quickly it’s almost like a sexy, rock’n’roll infused rap, with the main question arising: ‘what came first, the chicken or the dickhead?’ Produced by Last Shadow puppets drummer James Ford and Queens of the Stone Age icon Josh Homme, the organ intro and fiery guitar gives it a pure, authentic desert rock feel which works as they recorded it in the infamous California studio Rancho De La Luna.

Black Treacle is one of Suck It and See’s most poetic tracks, drawing together indie-alt rock with garage and desert rock. The track’s B-Side features Richard Hawley on lead vocals, and the two tracks feature a heavy Sheffield influenced sound, with the band taking the tracks right back to their authentic roots. The track is about an indecisive relationship, full of complications and troubles resulting in the girl leaving having drawn him in. This rejection isn’t a black and white, clear cut theme though; like most Arctic Monkeys tracks, the real meaning is hidden behind dozens of beautifully twisted metaphors, almost like Alex doesn’t want you to find out what he’s thinking. The most beautiful lyrics, ‘somebody told the stars you’re not coming out tonight, and so they found a place to hide’ make the song truly captivating from start to finish.

This soft indie track from the band’s third album Humbug is full of poetic lyrics which, like Black Treacle, are quite hard to gain exact meaning from. Unlike the rough direct attitude of Whatever People Say I Am, That’s What I’m Not, Suck it and See has a more vague hazy approach with the track’s meaning disguised in Turner’s elegant symbolism of the ‘fools on parade.’ Some think the girl who’s ‘saying enough, she’s just giggling along’ is Alexa Chung, Alex’s beautiful English-rose ex-girlfriend. Her approach of ignorance to the press may have inspired this beautiful song, and the sense of mystery and excitement at the ‘secret door’ makes it a genuine lyrical masterpiece.

The B side to the Suck it and See single, Evil Twin is one of the band’s finest pieces. The sharp witty video stars Matt Helders and Breana McDow (now Helders) in a fiery messy relationship, full of motorbikes and rough American culture; the B-side is almost like a contrast to the soft romanticism of Suck it and See, and has a rough edgy sound to it. The cheeky tongue in cheek lyrics feature Alex singing in a style very similar to Pretty Visitors, and features the famous Sheffield catchphrase ‘Tha Knows.’ Jamie and Alex’s hefty guitar riffs alongside the blurred slightly distorted microphone sound and Nick’s immense bass line make for an outstanding B-side, which actually charted higher in the charts than the single itself did.

Prostitution, drugs and nasty scummy pimps are not what you’d expect a 19 year old to write about so eloquently, yet Alex portrays this story with so much conviction and maturity you wouldn’t think he was still a teen when he wrote it. The track, which has become a crowd favourite, tells the story of a young girl who’s ‘fucking freezing, scantily clad beneath the clear night sky,’ making propositions to random men and being picked up by scummy ones every night. The conviction and rawness in the song easily makes it one of their top tracks, and features a drastic change after the first verse, shifting from a light, almost acoustic sound to a heavy rock verse with an intense guitar riff accompanied by Andy’s deafening bass.

The perfect end to the band’s immense second album, 505 is a smoky sexy track featuring mod-rocker Miles Kane on guitar. The track is seductive and mysterious, telling the story of a girl waiting in her apartment or hotel room, resulting in all Arctic Monkeys fans dreaming of staying in room 505 one day. Recorded by Mike Crossey (who has a Brits 2016 nomination,) Alex admitted that the track was the first proper love song recorded by the band. A poetic masterpiece, Turner’s lyrics have arguably never been stronger, nor more emotive or mesmerising. These genius lyrics paired with the staggered rippling effect on the guitar and Matt’s meticulous drumming, the track ends the band’s killer second album beautifully. 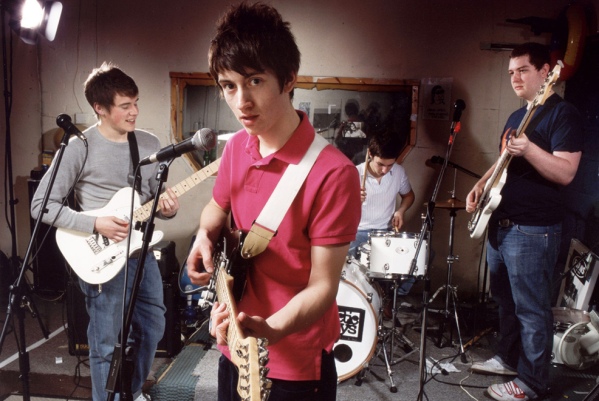 This crowd pleaser is definitely one of Arctic Monkeys’ top tracks of all time; the honest, down to earth lyrics make it sound as if Alex is having a light hearted conversation with you, and the beautifully simplistic tone to the track makes is one of their top ones. The song talks about moody girlfriends and missing the playful jokes and laughter from the start of the relationship, compared to her being ‘argumentative’ as she’s ‘got that face on.’ The meaning of the phrase ‘mardy bum’ (used up north) means someone who complains a lot which explains why her frown is like ‘looking down the barrel of a gun, and it goes off.’ And this combination of cheeky tongue in cheek lyrics and catchy guitar riffs from Andy and Jamie makes it a top track on their astounding debut.

Listen to these tracks below: