Last Saturday night (19th March) saw Slaves guitarist Laurie Vincent debut his first solo art exhibition at the Amersham Arms in London. Away from sold out gigs with punk vocalist and drummer and other half of Slaves, Isaac Holman, Laurie tattoos, paints, and owns his own clothing brand Young Lovers Club. As an artist, Laurie’s work is rich and intense, with controversial connotations behind the bold in your face street art style pieces. His creativity and originality is clear in everything he does; ‘As long as I can remember I have created things. It’s healthy, it’s kept my imagination alive and made the world more colourful and interesting.’ In Q magazine last year, Laurie described his paintings as ‘cheap thrills. Bright and trashy. Sexy.’ And they really are. His art is full of character and personality, and makes you feel something; they’re evocative and provoke discussions and confusion at the hidden suggestive features in his art. Based in Lewisham, Laurie’s work is bold, intense and full of motifs and mockery, and on Saturday night it was all on show at his first solo art exhibition. Despite the pub having strict licensing laws (meaning I wasn’t technically allowed to be there,) Alex from Wonk Unit was lovely enough to take me upstairs and show me Laurie’s art anyway. The room where the art was being displayed was packed with his vivid paintings, and full of vibrancy and brightness and colour. He had an array of paintings on show, including ‘Balaclava,’ ‘Mike’ (a witty cartoony street art style painting of Mike Tyson) and ‘Streatham’ which features the motif on plastic bags which crops up throughout his paintings. Despite the cartoony style in some of his work though, Laurie’s paintings are far more intriguing and sophisticated, with more thought provoking backgrounds to them. For example, ‘Mind Control’ is ‘based on the theory that fluoride- which is in your drinks and toothpaste- actually blocks out your third eye and suppresses it. If you avoid fluoride- using natural toothpaste and drinking bottled water instead of tap weather- you can open up your third eye.’

The mockery of religion is another running theme in Laurie’s paintings. ‘Religion is humorous to me’ Laurie told NME; ‘I love churches- it’s mad that they built these massive stone buildings when everyone was still living in huts- but I don’t like what they stand for.’ But religion isn’t necessarily a bad thing he told NME. ‘I think faith is wicked and I admire people who believe in a higher power. The skateboarder Rodney Mullen is so intelligent he’s come to the conclusion that you have to believe in religion because there’s no answer. If you’re super intelligent, you think: Fuck! There has to be more [to life] because it’s insane.’

My favourite piece from the exhibition was definitely the mermaid in a balaclava holding a machine gun, with ‘BURN BABYLON!’ inscribed at the bottom of it. Balaclavas are used a lot in Laurie’s work, and you can even purchase one of them from the Young Lover’s Club website (link below). Other innovative intriguing pieces included the painting modelled on a plastic soldier (according to Alex) with the words ‘kill, kill, kill’ at the top of it. It also features teeth dotted on the side of it and an unfinished sketch of Laurie’s infamous flower design; his paintings are random and messy, yet refined and intricate at the same time. The flower painting, which was used in the exhibition advertisements, is more simplistic than the vibrancy and dynamism of his other paintings, but just as interesting. ‘Flower Pot’ is like a crossover with Laurie’s clothing brand, and when speaking about the painting he said; ‘another thing I love about art is the simplistic kids’ drawing style. I love Andy Warhol because his whole thing was: ‘What can I get away with?’ This took me 10 minutes but maybe one day a Russian billionaire will pay millions for it and I’ll be like, ‘what a dickhead.’ This love for Andy Warhol is clear too; many of his pieces strike resemblance with some of Warhol’s pieces, like ‘Ten-Foot Flowers’ (1967) and ‘Cologne Cathedral’ (1985.) 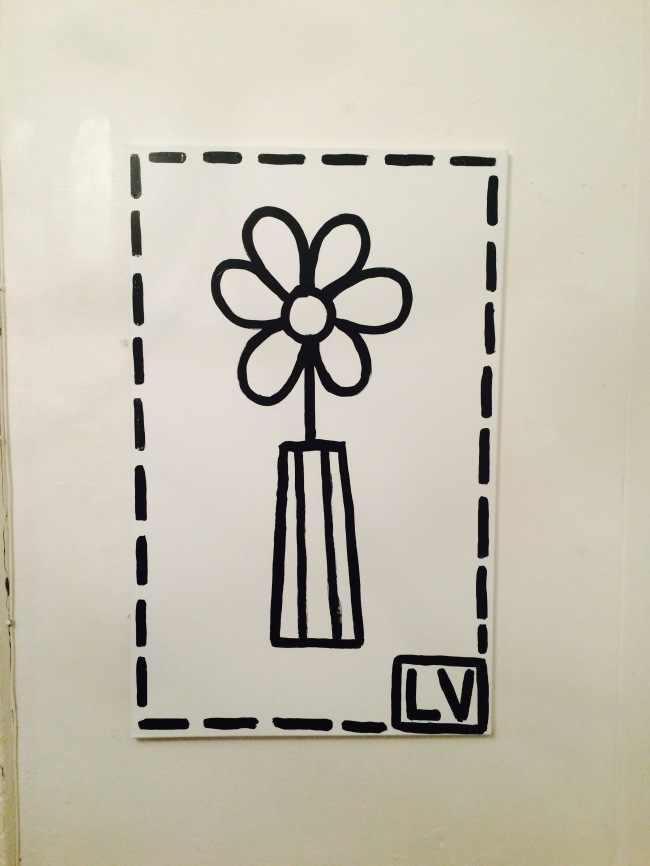